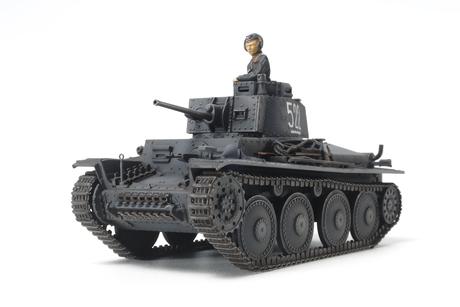 The Panzerkampfwagen 38(t) was originally a Czechoslovak tank of pre-World War II design. After Czechoslovakia was taken over by Germany, it was adopted by the German Army, seeing service in the invasions of Poland, France and the USSR. Production ended in 1942, when its main armament was deemed inadequate. In all, over 1,400 Pz. 38(t)s were manufactured.

This model kit can be a base for a Dust 1947 unit. After quite heavy conversions it can serve Mythos players as the Annihilator tank.

The servants of the Mythos forces don’t have access to the latest military technology and vehicles available to the other Blocs. They do their best to steal some, but are often stuck with equipment from the last War. Nevertheless these can be quite deadly and still do the job beautifully. With that many machineguns, the Annihilator shreds to pieces any infantry or aircraft fool enough to come in range. The wrath of the cultists will destroy their enemies thanks to this killing machine!