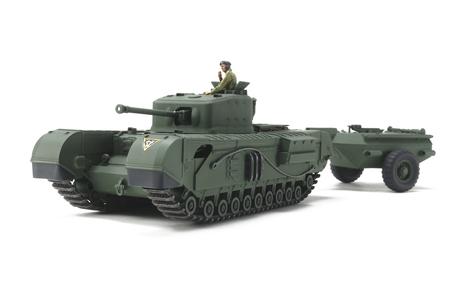 The Churchill design was the result of a chastening experience for British forces in early WWII, a more modern design that could be produced quickly to make up for armor shortfalls after the Dunkirk evacuations. The Mk.VII variant was up-gunned with a 75mm gun and had improved armor up to 152mm thick! The Crocodile is one of the most notable “special” variants of the Churchill. It had an 80-plus meter range flamethrower in place of the front machine gun, towing its fuel and compressed nitrogen propellant in a trailer behind.

This model kit can be a base for a Dust 1947 unit. After quite heavy conversions it can serve Mythos and Mercenary  players as the Crocodile tank.

The servants of the Mythos forces don’t have access to the latest military technology and vehicles available to the other Blocs. They do their best to steal some, but are often stuck with equipment from the last War. Nevertheless these can be quite deadly and still do the job beautifully.