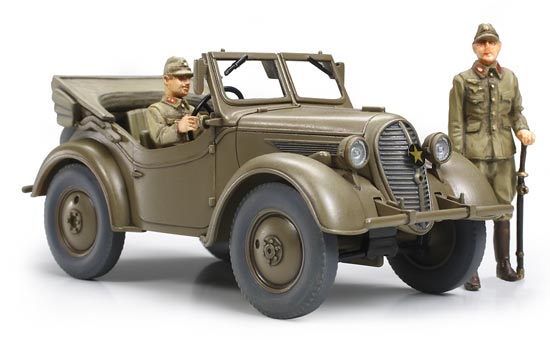 The Type 95 was a Japanese scout car built by Tokyu Kurogane Industries (東急くろがね工業, Tōkyū Kurogane Kōgyō), and was used during the war with China and World War II in the East. Between 1936 and 1944 approximately 4,700 were built. It was the only completely Japanese designed reconnaissance car ever used by the Imperial Japanese Army, which tended to use civilian cars. Its nickname is the « Yonki » (よんき) which in Japanese means « all-wheel drive ». In the field, soldiers often called it the « daruma » after the Buddhist symbol for good luck.

It is one of the world’s first four-wheel drive passenger vehicle placed into mass production, just prior to the Willys MB (1941), the Volkswagen Kubelwagen (1940), and the GAZ-61 (1938).

The Type 95 accommodated 3 persons – two in the front and one in the back. The two-cylinder, V-twin, four-stroke, air-cooled gasoline engine, which developed 33 PS (24 kW; 33 hp) @ 3,300rpm, was an advantage in cold climates found in China, and had 4-wheel drive, using a gearshift activated transfer case to engage the front wheels. It was manufactured without weapons and unarmored. It had advantages over the Type 97 motorcycle used by the Japanese Army, which had much less off-road mobility, and so limited troop mobility. It had tall, narrow wheels which helped it to travel over rough terrain, mud and snow.