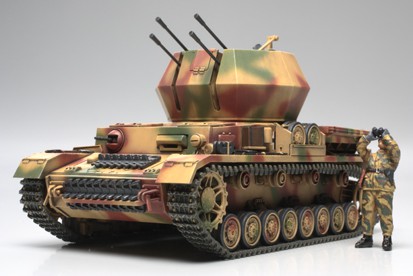 In the first years of World War II, the German military forces had less interest in developing self-propelled anti-aircraft guns, but as the Allies began to gain air superiority, the need for more mobile and better-armed self-propelled anti-aircraft guns increased. During the early summer of 1944, SS-Hauptsturmführer Karl Wilhelm Krause with the 12th SS Panzer Division Hitlerjugend came up with the concept of the Flakpanzer IV Wirbelwind. He presented the concept to SS-Obersturmbannführer Max Wünsche, commanding officer of the 12th SS Panzer Regiment and it was approved by Adolf Hitler.

This vehicle was extensively used on the Eastern Front, during the North African campaign and in France and Sicily. The « Krupp-Protze » was of relatively advanced design. Its fuel consumption was relatively high (24 Litres / 100 km on road) in comparison to the comparable Opel Blitz 1.5 t truck (16.5 liters / 100 km, produced 1938 – 1942). Total production was about 7,000 units.